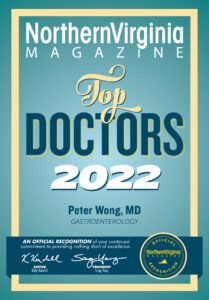 Dr. Wong has held several Faculty positions in Gastroenterology, is well published in the area of Gastroenterology and has earned numerous awards in research and academia. He has been a podium speaker of his research studies in National Meetings. He was awarded many medals during his service in the U.S. Army including the Meritorious Service Medal, Army Achievement Medal, NATO Medal, Commendation Medal and the National Defense Service Award.

Dr. Wong currently serves as the Medical Director of the Endoscopy Treatment Center at Mary Washington Hospital. He was recognized as one of the region’s top gastroenterologists by Northern Virginia Magazine in 2016.

Dr. Wong is active in his church, enjoys swimming, jogging, Tai Kwon Do (black belt) as well as spending time with his wife and two children. He is a passionate classical musician. He is an accomplished violinist in the community as 1st violinist of the Spotswood Baptist Church, Mary Washington Philharmonic Orchestra, Rappahannock Pops Symphony and the Rappahannock String Quartet. He has played with the Baltimore Symphony Orchestra.

At Fredericksburg Endoscopy Center, the physicians are experienced in diagnosing and treating a variety of gastrointestinal issues. Schedule an appointment by calling (540) 371-7600